Learn Spanish with a Robot

Spanbot is the worlds first Spanish teaching Robot.  He's cute, adorable, and a real taskmaster when it comes to learning Spanish. 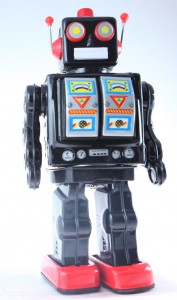 A robot is a mechanical or virtual artificial agent, usually an electro-mechanical machine that is guided by a computer program or electronic circuitry. Robots can be autonomous, semi-autonomous or remotely controlled[citation needed] and range from humanoids such as ASIMO and TOPIO to nano robots, ‘swarm’ robots, and industrial robots. By mimicking a lifelike appearance or automating movements, a robot may convey a sense of intelligence or thought of its own. The branch of technology that deals with robots is called robotics.

Robots as teacher assistants let children to be more assertive during the class and get more motivated. South Korea is the first country deploying a program to have a robot in each school.

Why Crowdfund a Spanish Robot?

Crowdfunding is a financing method that involves individuals networking and pooling their resources, in order to support seeing a project to completion. Rather than seeking substantial sums from a small number of investors, one would operate a crowdfund in order to go directly to those MOST interested in what they are making, and involve them in the process from the beginning.

With this project, we’ll be able to involve you in the beginning poocess, and you can tell us the most important words to start with.